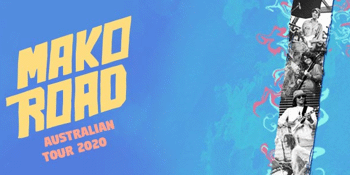 with special guests
The Zoo (Fortitude Valley, QLD)
Wed 15 April - Thu 1 October 2020 7:00 pm
18 Plus
Alternative
Indie
Send this event to
POSTPONED EVENT: Due to recent announcements by the Australian Governments, Mako Road’s Australian tour is being rescheduled. Oztix will email ticket holders once new information has been recevied.


LIVE NATION BUSHFIRE RELIEF - $1 from every ticket sold will go to those who need it.

Indie-rock outfit MAKO ROAD are heading back to Australia to follow up on their SOLD OUT 2019 Australian tour. The New Zealand four-piece will bring their hazy summer psych, pop & groove infused tunes to Brisbane, the Sunshine Coast, Byron Bay, Melbourne, Adelaide, Sydney, Perth and Bunbury this April.

Tickets for all shows go on sale at 2pm Thursday, January 23.

Mako Road have been tearing up the New Zealand music scene since their inception in 2017. Formed in Christchurch, New Zealand, the Wellington based group have amassed over 20 million streams online with their debut garage recordings. They have sold-out tours around New Zealand and Australia, played New Zealand’s biggest festivals, and supported acts such as Ziggy Alberts, Shapeshifter and Leisure. Their cruisy records translate into an electric live set that has wowed summer crowds over the 19/20 festive season.

Round out the end of summer with some dreamy, summery soundscapes delivered by one of New Zealand’s hardest working bands.