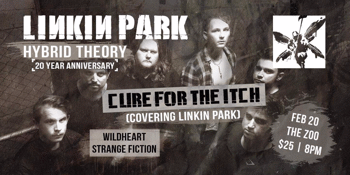 On October 24th, 2000, Linkin Park released their debut album 'Hybrid Theory' to the world. It's unique blend of metal, hip hop and numerous other genres and themes led to it quickly becoming one of the defining, influential albums of the alternative heavy music scene, selling over 27 million copies worldwide to date and changing the landscape of heavy music forever.

Just over 20 years on, with the worst of the COVID-19 pandemic in the past, we are finally able to celebrate the 20 year anniversary of this groundbreaking release, covered in full (along with other LP hits) by Brisbane-based Linkin Park tribute act, Cure For The Itch.