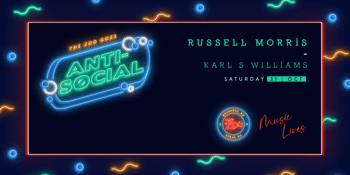 Grab your ticket and help keep your local artists and venues alive.

SESSIONS LIMITED TO 100 TICKETS SO GET IN QUICK
**** Please buy your tickets with your group if possible and arrive with your group so you can be sat together ***
ROUND 2 of The Zoo’s Anti-Social series is centred around embracing change and adapting to new thought process while focusing on and supporting local and grassroots artists.

We are stoked to announce the legend

After six decades on the road, an album can almost write itself. It might arrive in the space of a few months, fully formed in vision and texture in the mind of the vigilant creator. But it takes a rare combination of talent and circumstances to realise that vision as vividly as Black and Blue Heart.

"I'd met Bernard [Fanning] years ago," Russell Morris remembers. The Powderfinger frontman came backstage at one of the Australian rock legend's countless gigs to pay his respects with a mutual friend. "But It wasn't til I moved up to Queensland last year that we sat down and started talking."

The warmer environs had already exerted a strange, organic influence on the songs Russell was writing in the wake of the platinum-selling, ARIA-winning blues-rock trilogy — Shark Mouth,Van Diemen's Land,Red Dirt Red Heart— that so spectacularly relaunched his career from 2012 onwards.

"I thought I was writing an album which was rootsy, bluesy, almost psychedelic, but nothing came out the way I expected." He gave the demos to Fanning and producer Nick DiDia (Springsteen, Pearl Jam, Powderfinger) and "they rang me back within two days," Russell says. "They said, 'We can't stop listening to these songs. This will be a great album'. So I said, 'Let's do it'."

"I didn't want to have any smooth edges," Russell says. "Pop songs were the last thing I wanted. The musicians had the songs the week before but they were told not to do too much work. They came into the studio, we'd play them once, twice or three times, and that was it."

That raw energy commands attention from the ragged count-in of Ain't No Angel, slammed down with splashy drums, overdriven Hammond organ and vintage vocal echo. From that bracing opener to the sinuous, conspiratorial whisper of Is There Anybody Out There?, this extraordinary album begins to climb yet another peak for one of our all-time greatest singer-songwriters.

"I've got two passions: history and astrophysics," Russell says. "Is There Anybody Out Thereis totally out there; not like out in my backyard, but out in the universe. It's questioning how much life is out there in the great beyond and wondering … 'Are you going to contact me?"

Co-written with Split Enz's Eddie Rayner maybe 15 years ago, it's the only song that wasn't fresh off Russell's pen. A lifelong observer of human experience, he found inspiration in art and life, past and present.

A classic gangster film informed the tragicomic character portrait of Witness Protection. Fat Man and the Priestcame from a conversation with a mate "about people who sit in moral judgement of other people."

The office drone in Asleep at the Wheelmay have come from distant, monotonous memories of working the mail desk for the Kiss Army in Los Angeles back in the mid '70s, he says with a laugh.

"I think the song that's had the most emotional connections with people is Forever Remembered. It's about missing people close to me who I’ve lost; friends like Jim Keays and Darryl Cotton and [rock photographer] Ros O'Gorman. They're all in there."

Then there’s the title cut, a song of simmering tenderness and empathy that Bernard Fanning describes as “a song for the ages. Russell’s been a really substantial artist for a very long time but I think that song will live on with his best,” he says.

“As soon as we heard the demos, the quality and grace of the songs was obvious immediately," Fanning says of the album overall. "It sounded to me like the kind of music only someone with Russell's backstory could make.

"He's always been renowned for his incredible voice but it's really come into its own now. His tone just communicates this unique life experience, so we just had to get that down."

Born and bred in the USA, Nick Didia's perspective was more immediate. "I was hearing this amazing history for the first time as we were making the record,” he says of timeless Australian classics such as The Real Thing, Wings of An Eagleand Sweet Sweet Love. “And his stories are incredible. I mean, I thought I’d been around,” he laughs.

“Their contribution was enormous,” Russell says. “Bernard's harmonies in parts are fantastic [check the skybound chorus to Sitting Pretty, for instance]. He knew the songs better than I did. See, I wrote the songs so quickly, by the time we got to the studio I couldn’t remember some of the details. Bernard knew them back to front. Nick and Bernard's attention to detail was just extraordinary."

For their part, the producers deflect back to the source material, a rush of pure inspiration that Russell credits to the stunning career-reset of his Shark Mouthtrilogy.

“I went back to the blues, where I started in the early ‘60s, and that allowed me to reset all the quantum things in my writing and in my body. It kickstarted my creativity. I think that's how this album happened so fast and so confidently.

“The band, the studio... it all fell into place beautifully but the songs came from where I came from. I went back to the well and I drank from the fountainhead, and this is the result.”

At all times we will be working within approved COVID SAFE PLANS, Restrictions & guidelines, while trying to preserve an authentic live music experience.

For concerns or queries on safety please reach out to the venue direct for information on our COVID SAFE PLANS and measures for ticket holders, artists and staff.