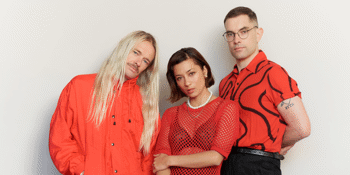 with Special Guests
The Zoo (Fortitude Valley, QLD)
Thursday, 9 December 2021 6:00 PM
80 days away
18 Plus
Indie
Metal / Hard Rock
Australian Artists
Music
Send this event to
Following a sold out tour through Victoria in February and an electric set at Yours and Owls Festival, Children Collide take on a national tour to follow the release of their upcoming album ‘Time Itself’. The tour comes after the release of ‘Man of the People’ and their studio album is out everywhere on August 27th on Spinning Top Records.

There was a time; A time of packed pubs, heaving festival mosh pits, loud guitars, churning bass, walloping drums. The kind of riffs that can set entire fields into a seismic bounce, with choruses designed to be sung en masse with index fingers raised in perfect syncopation. This was a time where a band like Children Collide thrived – and with their imminent return and a new album on the horizon, there's hope that there can be a time like that again.

A live phenomenon, Children Collide have performed sets at SXSW, The Great Escape, Splendour in the Grass, Falls Festival, Groovin The Moo and the Big Day Out. They’ve performed countless sold-out headline shows across the nation in addition to dates in London, Paris, LA, New York and Tokyo.

Time Itself is the band’s fourth studio album and their first album since the twice ARIA-nominated band’s third studio album Monument in 2012. It was another enduringly popular LP, following 2008‘s The Long Now and 2010’s Theory Of Everything, which debuted at #5 on the ARIA album chart and claimed the triple j feature album. Their repertoire includes some of the most well-loved Australian singles of the past decade, a roll call that includes Social Currency, Skeleton Dance, Chosen Armies, Loveless and triple j hottest 100 entries Farewell Rocketship, Jellylegs and My Eagle.