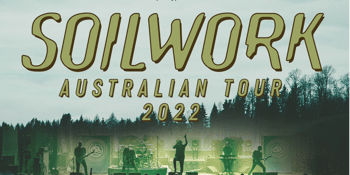 The Zoo (Fortitude Valley, QLD)
Saturday, 5 November 2022 7:30 pm
122 days away
18 Plus
Heavy Metal
Music
Send this event to
Sweden's melodic death metal veterans SOILWORK are back with big news! A new album and a return to Australia!!! After their EP release back in December of 2021, it is time for the first studio album in three years. Proudly SOILWORK announce their twelfth and latest masterpiece Övergivenheten which will be released on August 19th via Nuclear Blast Records. Musically and lyrically evolved, SOILWORK release their most complex and elaborate album to date which marks a new phase of their career. Not only due to the tremendous effort and time they put in but also the results on the album reflect years of development and experience as a band, which is ultimately provided on Övergivenheten for the fans to enjoy.

And riding on the tails of the new album, Australia welcomes back SOILWORK for a National Tour in November 2022. After their highly successful 2019 tour, Hardline Media are pleased to welcome these Swedish legends back down under!! 5 shows, 5 states, 5 days!!! The tour will start off in Perth, before heading through Adelaide, Sydney, Melbourne and then end in Brisbane, playing songs from the new album Övergivenheten, as well as all the classics from their long and illustrious career.